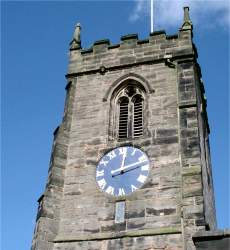 The tower clock installed in St James church is the sole known surviving example of a turret clock made by a member of the REA family of local clock makers based in Walton on Trent.

The original mechanism was manufactured in 1805 and consists of a 2 train movement with pinwheel escapement. The movement is contained within a double frame, a feature common on some Derbyshire, Lancashire and Yorkshire clocks. This design has gears and escapement contained by the short frame, whilst the long frame encompasses the two winding barrels. The three John Whitehursts of Derby favoured this system during over 120 years of making turret clocks.

The two trains are driven by weights of 1½ cwt and 2½ cwt respectively and are manually wound by the clock keeper each week.

The escapement is considered by experts to be unusual having the pallets and the pendulum at right angles.

A locking plate controls the striking mechanism. Striking is on the hour and a linkage runs through the roof of the clock floor to a hammer that acts on one of the two bells in the bell chamber above. 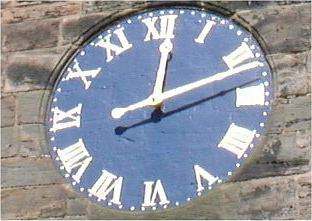 The time is indicated on a single dial on the south elevation of the tower. This consists of a circular dark blue face on the flat stone of the tower wall onto which 24carat gold leaf Roman Numerals have been applied. The hands are ornate iron, gilded with English gold leaf and are driven through motion and bevel wheels connected to the mechanism by an hour shaft and minute pipe. 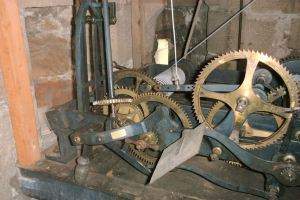 The mechanism is believed to have operated without trouble up to the mid 1940’s when repairs were undertaken by local craftsmen. These repairs, and considerable care and attention from a long line of clock keepers kept the clock going through to 1995. At this time the clock was out of commission and an inspection by experts deemed the wear on many of the parts to be so excessive that a major restoration was required.

The restoration project caught the imagination of a small band of villagers and the churchwardens, who were to become the Clock Restoration Committee. After a debate as to the restoration options (the replacement with an electric movement being instantly dismissed) and costs, it was unanimously decided to raise funds to effect a full restoration to original condition.

Following a service in 2001, a visiting member of the British Horological Institute commented that in view of the quality and condition of the mechanism, the clock could be expected to be performing satisfactorily for at least another 200 years.